Over the boundary of Barnes Yard, in the rear of the Masons Arms area, a quantity of Roman pottery has been found. Much of the pottery found has not been turned by the plough suggesting that Romans were based very near by.

Roman coins have been found around the parish, including a hoard at North Farm

Amongst the archive are several stages of a paper that Howard published on the village website in the late 1990s. In one of the drafts [ALDHC 12.2.66] is the following statement:

“Some years ago when a trench for a new water main was being dug quite close to the public conveniences [some flint foundations were destroyed by the JCB] which were constructed in the same pattern as the stonework of the Littlecote Roman villa. Whether this means that a more substantial Roman building awaits discovery is open to conjecture.”

So perhaps the Heritage Centre is built on top of a Roman villa!

There is also evidence for Roman field systems, baths, lead pipes and coins at Upper Upham.

Howard Gibbs wrote this article years ago for the old website.

Some of the Roman pottery found: 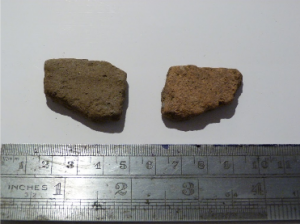