The Grand Opening ceremony for the Aldbourne Heritage Centre was held on Easter Monday 2016. The formal opening was performed by Phil Harding of Time Team who cut a tape held by the two oldest living native-born Aldbourne residents, Ethel Underwood and Douggie Barnes, both in their nineties. (A native-born Aldbourne villager is known as a “Dabchick”, a term that was heard frequently through the day).

After the opening the Heritage Centre was presented with two replicas of the Aldbourne Cup, a 3,500 year old Bronze Age vessel that was found in a barrow about a mile north-west of the village. The first replica which depicts the cup in its present state (as permanently on view in Gallery 51 of the British Museum), with the less-than-perfect restoration that was done in the Victorian age was presented to the curator of the Heritage Centre, John Dymond, by Dr Neil Wilkin, Curator of the European Bronze Age Collection at the British Museum.

The second replica, of the pot in its original Bronze Age condition, was presented by its creator, Graham Taylor of Potted History of Rothwell, Northumberland. This version of the replica was decorated by filling the indentations and grooves cut into the body with chalk paste giving the stunning object we see in the video. The decision to decorate the cup in this way was taken after much discussion between the Heritage Centre, the potter and Dr Wilkin at the British Museum. While the evidence on the Aldbourne Cup itself is not clear, a second similar cup found in the same barrow at the same time and now held in store at the British Museum was quite obviously decorated with a white inlay.

As a final revelation for the day, John Dymond, the curator announced that early in March the Heritage Centre had discovered and acquired a complete typescript copy of the play “The Village Wedding” by the playwright Charles McEvoy which written for and performed by Aldbourne villagers in 1910. The play and its cast of “rustic comedians” (to quote a contemporary newspaper) ran for five performances in London and two in Manchester. The play was never published and for the last 90 years had disappeared. An unsuccessful search was carried out just prior to 2010 in the hope of celebrating its centenary and it was thought that that failure extinguished all hope of finding the play. Then a few weeks ago a copy that had been used for a short tour in 1924 turned up on an Internet book market. The complete script is now in Aldbourne and here it will stay – and it almost certainly will be given a new performance very soon.

Following the opening, Neil Wilkin and Graham Taylor, accompanied by David Dawson, Director of the Wiltshire Museum and James Dilley from Berrycroft Hub, were taken to view the barrow where the Aldbourne Cup was found in 1879. 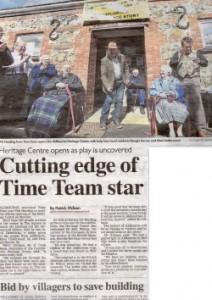 Here’s the coverage we got on page 5 of the Gazette and Herald.

There is also some nice coverage on the Wiltshire and Swindon History Centre Blog.