A brief summary by Chris Rust

When I first skim read the report and looked at the drawing thought it was boring, but there’s an interesting twist at the end! 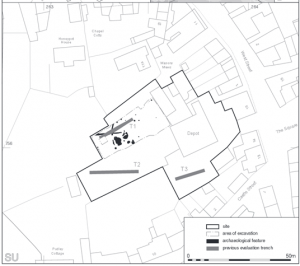 Dating of features is by the latest find within the feature – most dating evidence here was pottery .

You’ll see only one evaluation trench had anything interesting

Led to an area 16x36m being excavated fully

So let’s zoom in a bit 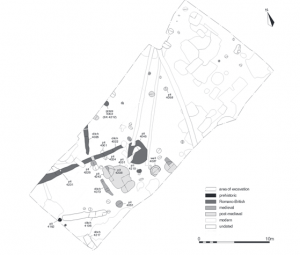 Rather busy, so I’ll simplify in a moment

Area behind the old street frontage so no buildings found

Some features had no finds so are undated, some only modern (vehicle parts etc, and modern rubbish) so we’ll ignore those.

Now the diagram stripped of anything but prehistoric 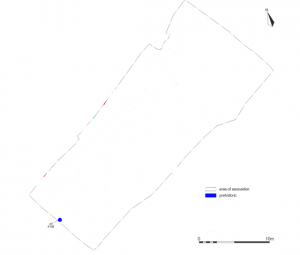 Easy to see not much there!

One pit with a few sherds of pottery, possibly as late as 1st century AD 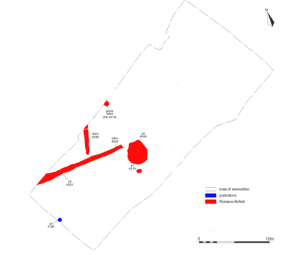 Grave is of a child (N-S alignment), age 1-2yrs, supine position, Carbon dated to 1-175AD. Bones indicate they had suffered from metabolic disease and nutritional deficiencies , including anaemia and or scurvy

Just over 2m wide, and 2m deep, 50 sherds – rubbish pit? Good mix of different pottery types including one bit of samian – so someone round here had money for decent crockery 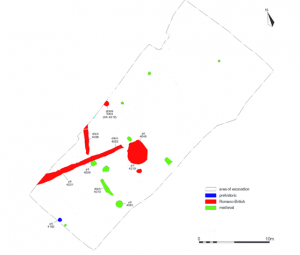 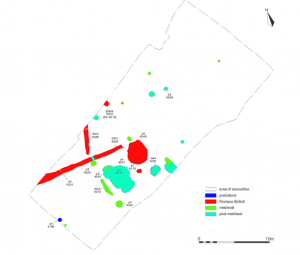 Well formed of lime mortared rough hewn blocks, not excavated to a depth of more than 2m – well are renowned for being dangerous to excavate 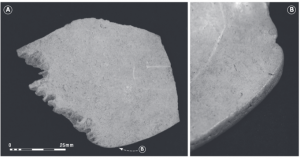 They’re not sure why

Most obvious parallels are Dutch about the time of Christ

Dutch examples seem to have been used as shallow cups

So do we have another Aldbourne Cup, but of a more macabre type??