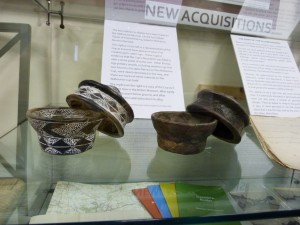 The Aldbourne Cup is an early Bronze Age (Wessex Culture) cup with a lid, dating from c.1700-1500BC.  It was discovered by Canon William Greenwell when he visited Aldbourne in 1878 and 1879 and excavated a number of the Bronze Age barrows in the parish.  Both the cup and the lid are finely decorated inside and out with patterns such as chevrons, diamonds and triangles.  Alternate shapes are filled with pointillé (stippled) decoration.

The Aldbourne Cup was almost certainly used as an accessory to the cremation at the barrow in which it was discovered, and it is generally thought that it was used to contain material such as incense, as part of the ancient cremation ceremony.

Because of its quality, the Aldbourne Cup has become the exemplar for all similar cups – there are several, all of them found in Wiltshire and the immediately surrounding area – which are now  routinely referred to as ‘Aldbourne Cups’, irrespective of where or when they were found.