Through the winter of 2016-2017 we have been doing a survey of graffiti in St Michael’s Church. We would like to thank the church authorities and bell ringers for their permission and help in getting access to some area of the church that aren’t always accessible. I would also like to thanks Jan Lambourn who helps with finding and recording the graffiti.

So what do we mean by graffiti – the spray can sort? well thankfully not, what we’re interested in is stuff like this

Why did we start looking? I read an article in Current Archaeology about a survey happening across churches in Norfolk and wondered what we might find. We have been in contact with the co-ordinator for the survey of Wiltshire churches (it turns out that a lot of work is being done across the country now)

So apart from a general sense of curiosity why do it? Some of it turns out to be ephemeral, such as these pencil marks near the door to the tower staircase. Sadly we may never be able to identify what this said 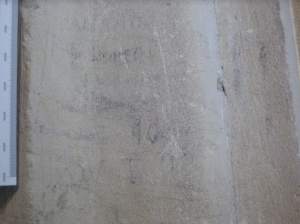 So of it is now inaccessible – this is behind the fitted kitchen at the base of the tower. My thanks to Andy Gruneberg and Jo Hutchings for the pictures which we’ll keep with out project records

Also sometimes new graffiti appears, I am certain the one below wasn’t in the porch when we first visited, but it is now! 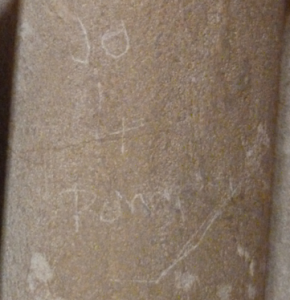 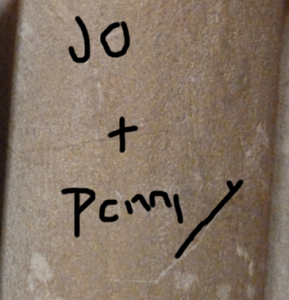 This also goes to demonstrate how unreadable the graffiti can be, so I have doctored a number of the pictures with an electronic marker pen to help show what’s there.

Where do we find the graffiti? One place is on stonework… 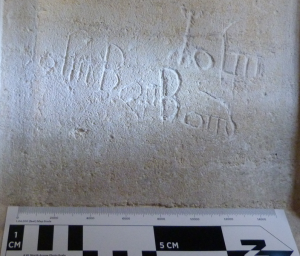 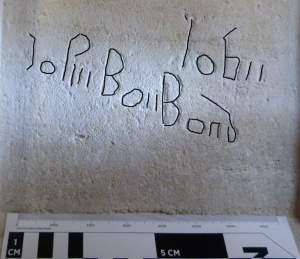 These can be found on the south side of the square pillar near the ornate tomb. John for whatever reason was having multiple attempts at carving his name. (The Bond family owned the court house at one point, so we might be able to pin down when John was in the village)

That the lettering is partly filled with old limewash attests to it’s age – old enough to have been painted over and then the paint removed again. What other graffiti might be hiding underneath paint elsewhere?

But it’s not just stonework that gets graffiti, below is what appears to be a modern – did  the love between CW and MW survive as long as the graffiti?

Sometimes the graffiti is rather inaccessible, the following two images are photomosaics of the tower wall above the fitted units (so 7′ and up), I have highlighted all the obvious graffiti in each image. This goes to show quite how much there is, and explains why I gave up counting

Below is a detail of just one stone, I think there are probably at least 10 pieces of graffiti, if we were able to take close-up pictures of the wall higher up we’d probably have a count in the 100s.

Continuing on the theme of inaccessible, there is graffiti in the ringing chamber

But it’s also on the roof in the lead sheeting – much of this can only be fully identified by examining high-resolution photographs close up on a large screen, then tracing over the letters. Innevitably since lead is soft the graffiti gets slowly worn down by each succeeding visitor to the roof. 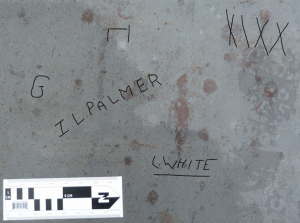 The following photos were taken before the fitted units were added, so are no longer visible

The next may have been left by my 7th cousing one removed: Fred Westall (b 1893) – did he leave it before going to war, wanting to leave some permanent mark on the world, or was it a celebration of having survived?

It can be difficult disentangling graffiti at times – in places it’s a palimpsest, the following examples are from the ringing chamber, you can see how graffiti has been created over graffiti, making some of it very hard to pick out

But not all of it is hard to read, Juliana Edwards and a Mr Scarrot were on the roof together and left their names very deeply carved into the lead – this will probably survive many years

Another way of making sure your graffiti lasts longer is to create wider marks than can be created with simple scratching, such as this one

This one seems to have been interrupted part way through – the “William” is much stronger than the surname – Hatt?

It also goes to show that the orthography of the graffiti can give clues to it’s age. We’d be able to tell that the following piece was modern even with the handy date. Note that it’s over a 1957 piece. Was Furse a surname?

This next is handily dated, but even without the date it’s handwriting style  is very much older than that taught in the schools even in the 1970s

But the style of these two is very much older, work remains to be done to establish quite when, but I suspect 18th century or before – not the W formed of two Vs and the barred I

But sometimes  we are handily given a date

This is in the ringing chamber, we have checked and the two soldiers seem to have survived the war. After the meeting I was told that in 1915 the Ordnance Survey which was still part of the Royal Engineers, was doing a major revision and re-triangulation of the maps of the country, and that they often used Church towers as a place to spot the other points from

Sometimes events are recorded, this one speaks for itself

In 1971 an 5 episodes of Doctor Who were filmed in and around the village, including from the tower, and it seems that the crew got a bit bored while they were waiting on the roof

And it wasn’t just that (you might have been thinking it was a concidence of initials), but remember that the store was called The Daemons 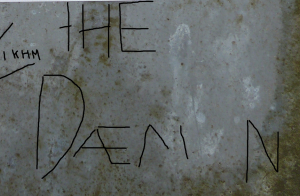 Probably the most interesting items of graffiti are graphicals ones.

But when traced over it looks even better, there’s quite a bit of detail

This love heart would appear to be from 1940, left by a Londoner, it’s a shame we’ll probably never know more about him

This piece is particularly enigmatic and we will be following itup with the county co-ordinator to see if they can make sense of it, it almost appears runic, but runes would have long been out of use by the time the church was built (surely?!)

This musical note can be seen on the East side of the column in front of the pews on the north side at a height of about 6′ – it doesn’t show well until raking light is applied – at the meeting people were surprised as they’d never noticed it before. It’s possible that the diamond form of the note gives a clue to the age

Some marks have been left by masons who would have had the metal protractor to make these circles. We don’t know the meaning yet, although an audience member has seen similar on a barn. We’ll follow this up with the county co-ordinator as well

These crosses are nice and obvious, although difficult to date – they’re on the south-western-most free standing column 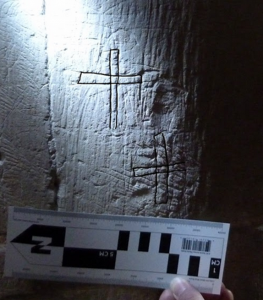 But the most interesting is on the same column as the crosses, and appears to  have multiple elements (possibly from different times) 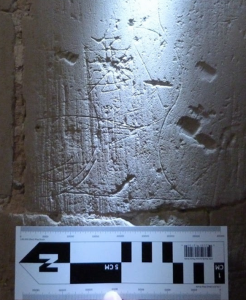 Even with tracing over the lines it’s pretty enigmatic – is that a head? why the Maltese style cross – this is another we’ll continue to research 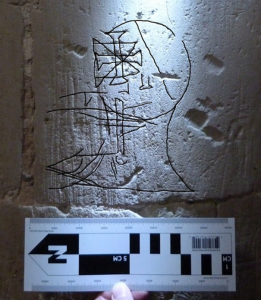 What next? well after the meeting more graffiti was pointed out to me around the Western door and on the lead of the font, so we have more recording to do, and we need to improve the quality of some of the photos, then we’ll work with the county co-ordinator to try to understand more about the meaning.

As a footnote, there was mention at the meeting of the old Mass Clock outside, it can be tricky to find, but we took this picture after the meeting. Note that it is half covered by the buttress, the buttress was added to the church after the wall was first built.