In digitising the record of where burials are located in the churchyard, kindly lent to us by the church before they went to their new permanent home we came across the following plan: 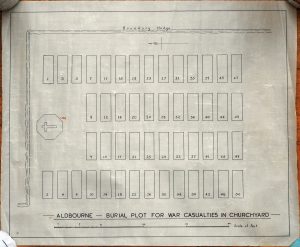 It seems that at the end of the first world war plans were started for where the casualties could be buried, the location seems to be the north east corner of the churchyard and would have featured a memorial cross. We don’t have a list of names to go with the 50 plots planned, but 50 is a noticeably lower number than the list we have on the roll of honour. We know from creating the roll that questions of who should be included arise quite quickly; do you include dabchicks who’d move away, do you include non-dabchicks who were resident here at the beginning of the war, and so on. It would have been interesting to know their criteria. There are only 41 names on the memorial inside the church, and 48 listed on the Memorial Hall plaques.

In the end it never happened, the costs of repatriating all the war dead for the whole nation would have been huge, even for just the Aldbourne casualties would have been quite a task, they died in locations from Northern Scotland to Iraq