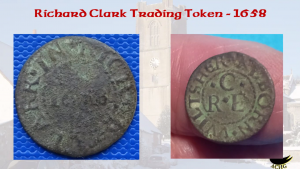 This is a token issued by Richard Clark in Aldbourne in 1658. During the English Civil War official coinage was in very short supply, and in order to continue trading many businessmen and towns around the country issued trading tokens which acted as a replacement currency.

This token is rarer than the John Adee “3 rabbits” token that we already had an example of. This was the first time we’d seen one of these come up for sale in 10 years – so were very happy to be able to acquire it. As you can tell from the right hand photo it really is very small – so displaying it in a way that allows people to see it well will be a challenge.

At this point in time spelling had not been standardised and was quite often phonetic, hence the token proclaiming “Alborn, Wilsher” – with a good rural accent it makes sense!