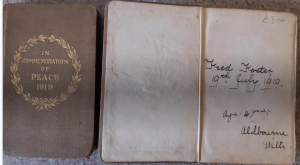 One of these was listed on eBay, and we bought it for a small fee given the village link, then we were offered the other by the seller. They were given to Fred and Arthur Foster in 1919. Wtih some research and asking around we now know that the boys father was killed in 1917. They had been living in London, but near the end of the war they moved to Aldbourne with their mother who was the daughter of Fred Smith who was the publican of The Crown at the time.

Their mother married Sydney David Hillier in 1923 and they all moved to Swindon where they remained for their whole lives.

Fred Smith was the landlord at The Crown until he died in 1936, we are grateful to their family for this photo (and others) that they gave us once contact was made in our researches.