We are lucky enough to have quite a few surviving barrows in the parish, they’re all scheduled ancient monuments. The descriptions below are based on their listing details. The SU numbers in brackets are the O/S Grid Reference.

Most bowl barrows date from the period 2400-1500 BC. Disc barrows, the most fragile type of round barrow, are funerary monuments of the Early Bronze Age, with most examples dating to the period 1400-1200 BC.

These barrows demonstrate solid evidence for Bronze Age occupation of the area. 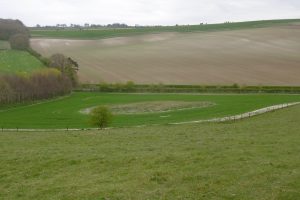 Two bowl barrows, aligned east-west, and set above the floor of a dry valley immediately south of Sugar Hill. The eastern barrow mound is 36m in diameter and stands to a maximum height of 1.5m. A ditch, originally dug to provide material for the barrow mound, is no longer visible at ground level but survives as a buried feature c.5m wide surrounding the mound. The western barrow is not visible as an earthwork but survives as a buried feature. The eastern barrow mound was partially excavated by Canon Greenwell, a prolific excavator of barrows, in the late 19th century. Finds included a cremation burial set on a wooden plank within a cairn, a bronze dagger, awls, faience and amber beads and a cup, later to become known as the “Aldbourne Cup“.

A linear barrow cemetery, orientated SE-NW, and comprising three adjoining bell barrows and a bowl barrow. The monument is aligned along the crest of a prominent ridge-top and on the opposite side of a dry valley from a second barrow cemetery. The bowl barrow is at the southern end of the cemetery. It stands to a height of 3m and is 29m in diameter. The mound has a flat top 6m across. Surrounding it is a ditch 5m wide and 0.5m deep on all but the eastern side where it survives as a buried feature. The southernmost bell barrow is 3.5m high and 22m in diameter. Surrounding the barrow mound is a sloping berm 5m across and an outer ditch 5m wide and 0.7m deep. The central bell barrow is 2m high and 18m in diameter. A berm c.4m wide surrounds the mound with an outer ditch 6m across and 0.7m deep surrounding the mound and abuting the ditch of the southern bell barrow. A central hollow 7m across represents early partial excavation of the site. The northern barrow mound is 3m high and 22m in diameter, surrounded by a berm 4m wide. The ditch surrounding the monument is 4m wide and 0.7m deep. All of the barrow mounds were partially excavated by Canon Greenwell, a prolific excavator of barrows, between 1885 and 1890. Finds included cremation burials, amber beads, flint flakes, a grooved dagger and animal bones. 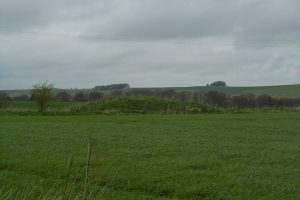 The barrow is set below the crest of Sugar Hill near the top of a steep east-facing slope. The barrow mound is 20m in diameter and survives to a height of 2m. Surrounding the barrow mound, but no longer visible at ground level, is a ditch c.3m wide from which material was quarried during the construction of the mound. Partial excavation of the site by Canon Greenwell at the end of the 19th century, produced a cremation burial and worked flint flakes. 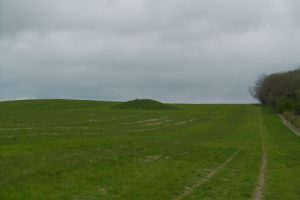 The barrow is set below the crest of a steep west- facing slope in an area of undulating chalk downland. The barrow mound is 3m high and 23m in diameter. Surrounding the mound is a ditch c.3m wide from which material for the mound was quarried. This has filled in over the years and now survives as a buried feature visible as a ring of darker earth on the east and north sides of the mound. The site was partially excavated by Canon Greenwell, a prolific excavator of barrows, between 1885 and 1890. Finds included the cremated remains of an adult set in a cist, or stone-lined box, and covered by a cairn. The cremation was accompanied by a bronze dagger and bone pin.

The cemetry includes four bowl barrows and a bell barrow aligned approximately east to west along the spine of a chalk ridge. The bell barrow, the most easterly in the group and known as the Giant’s Grave, has a mound 19.5m in diameter and 2m in height. The base of the mound is surrounded by a berm up to 4.6m in width, with an external ditch 3.7m in width and 0.3m in depth. A depression in the mound 4m in diameter and 0.3m in depth is probably the site of a late 19th century excavation by Canon Greenwell, who recorded an adult cremation, two bone pins and a fragment of a barbed and tanged arrowhead. A bowl barrow with a mound up to 0.7m in height abuts the western side of the Giant’s Grave. The mound is 18m in diameter, mutilated on its eastern side, and abutted in turn on its western side by a second bowl barrow. The second bowl barrow has a mound 17m in diameter, 0.8m in height and is surrounded by traces of a ditch up to 0.3m in depth and 3m in width. 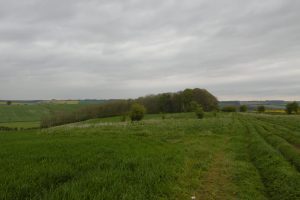 The third and fourth bowl barrows are protected within a separate area lying 250m to the west of the Giant’s Grave. The eastern bowl barrow of this pair has a mound 24m in diameter and 1.2m in height. It was excavated by Canon Greenwell who found an adult cremation situated within a circular cist, together with a bone pin, bone tweezers, a wrist guard and pendant. The western bowl barrow has a mound 15m in width and 0.7m high. It was also partially excavated by Canon Greenwell and was found to contain an adult cremation situated within a circular cist. Grave goods buried with the cremation included pottery, and beads made of shale, bone and shell. Ditches, from which material was excavated for the monument’s construction, surround both mounds. These have become infilled over the years but survive as buried features approximately 2m wide. 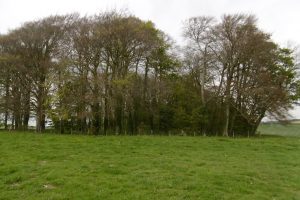 The barrow is set above the floor of a dry valley immediately to the south of Sugar Hill. The barrow mound stands to a height of 1.5m and is 40m in diameter. Although no longer visible at ground level, a ditch from which the mound material was quarried, surrounds the mound. This has filled in over the years and now survives as a buried feature c.5m wide. The site was partially excavated by Canon Greenwell, a prolific excavator of barrows, between 1885 and 1890. Finds included a central cist or stone-lined box containing a cremation burial accompanied by a dagger.

The monument includes a disc barrow and a sample of the adjacent Roman road located 780m north east of North Farm on the spine of a chalk ridge known as Peaks Down.

The northern side of the barrow was disturbed during the Roman period by the construction of Ermine Street and now survives as a low semi-circular platform 12m in diameter which is enclosed by a ditch 2m in width and an external bank up to 3m wide. The stretch of Ermine Street bisecting the barrow originally ran between the Roman settlements of Spinis (Speen) and Corinium (Cirencester). The southern edge of the road is visible as a slight linear ditch which continues either side of the barrow on an WNW-ESE axis and was utilised as a woodland and parish boundary in the post-medieval period.

The disc barrow was first mentioned by Richard Coalt-Hoare in 1819 in conjunction with an extensive prehistoric field system to the south east.

The barrow is situated on the southern edge of a chalk spur overlooking Aldbourne Chase. The barrow has a mound 34m in diameter and 0.7m in height. A ditch, from which material was excavated for the monument’s construction, surrounds the mound. This has become infilled over the years but survives as a buried feature approximately 2m wide.

The bowl barrow is situated on a chalk ridge 880m north east of Lower Upham Farm with extensive views to the west across the valley of the River Og. The barrow is circular in plan and consists of a low spread mound up to 18.5m in diameter and 0.3m in height. A ditch, from which material was excavated for the monument’s construction, surrounds the mound. This has become infilled over the years but survives as a buried feature approximately 2m wide.

Although not documented as such, local sources suggest that the barrow was one of several in the area investigated by Canon Greenwell in the late 19th century. This was supported by Passmore’s excavation of the site in 1934 which revealed traces of a series of trenches cutting the centre of the barrow. Passmore recorded that the barrow contained a central grave pit 3m in length and 1m in width and fragments of a Middle Bronze Age collared urn and cremated bone. These and a piece of Beaker pottery subsequently recovered suggest that the barrow was reused for successive interments over a long period.