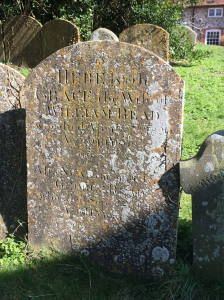 People have been buried in churchyards for many centuries

Although very few visible signs of pre-seventeenth century burials remain, evidence of the history of a churchyard is buried far beneath its more recent occupants.

St Michael’s church, as we know it, was built on the site of an earlier Saxon church. It is likely that Saxons, and possibly their predecessors, would have been buried in the vicinity. Sadly we have no evidence that confirms when the churchyard was first used as a burial ground.

Before the seventeenth century burial sites would have been marked, if at all, with stones, or possibly wooden stakes or crosses. Gravestones and other monuments generally survive from the seventeenth century. This is the time from which inscriptions developed, giving us some insight into the lives and social relationships of the deceased.

The oldest gravestone in St Michael’s churchyard is dated 1677.

Until the middle of the nineteenth century Aldbourne’s wealthier residents could be interred inside the church. The Burial Acts of the 1850s ended this practice.

In 1858 St Michael’s churchyard was extended to the west. “The ancient part to the south of the church was closed for burials in 1854 and so was spared that intrusion of unsightly memorials of alien materials which has disfigured so many village graveyards elsewhere.” (Note 1)

In 1883 the churchyard was extended to the north, and then further extended northwards in 1913, practicalities finally overcoming superstition: in the Middles Ages “it was believed that the north side of churches was haunted by evil spirits and that at the General Resurrection bodies buried there might be overlooked.” (Note 2)

By the beginning of the twentieth century cremation had, after much debate, become acceptable. We have no clear records of when ashes were first interred in St Michael’s churchyard, but the earliest reference we have to a burial of ashes is one that took place in 1952.

Over the centuries thousands of villagers have been buried in the churchyard, requiring, as with most burial grounds, the re-use of ground. With few viable  options to extend the churchyard further, parts of the 1883 extension have been re-used for ashes plots from the 1990s and burial plots from the late 1990s. In 2009 twelve gravestones were relocated within the 1858 extension, where current burials are accommodated.