Lifting The Lid on Medieval Aldbourne

This is the content of Liz Dymonds January talk on Medieval Aldbourne given to the Heritage Group.

What we think we know about 14th Century Aldbourne
and what can we prove?

There was a market on the green.

Was there a charter to permit this market?

John of Gaunt owned the village/manor and would stay at Upper Upham, hunting in the chase; and would come down to the court house to take a bath.

He also loved the rabbits raised at the Warren and would send down for them to be sent up to London for him.

He gave permission for Aldbourne inhabitants to take part in all markets in Wiltshire free of charge.

Maurice Crane wrote in his history: There was a market on the Green in 1311–

The first place to look is in the Victoria History of the Counties of England Vol 12 Wiltshire:

This is a Inq. P. M. for Henry de Lacy, Earl of Lincoln, whose wife was Margaret: Aldbourne is held from her inheritance!

Margaret is the great granddaughter of William Longspee, illegitimate son of Henry ll, and her great grandmother was Ela Countess of Salisbury!

The Inquisition ends with:

It doesn’t say on the green in the Victoria history; but in his notes at the Wiltshire Museum, Maurice Crane writes:

AD 860 – 960 Aldbourne village founded by Saxons. A church was built during this time possibly on the site of a heathen church. A market was established around and in front of the church.

But there is no reference for this.

But there is mention of the green in the Victoria History of Wiltshire, p. 69!

Because Aldbourne was owned by such an important person the market never needed a charter.

There is a letter from Wiltshire County Council.

You can also look at the Gazetteer of markets and fairs which describes Aldbourne market as: (Prescriptive) Thurs; recorded 1311 market was worth £1.6. 8d.

Alice de Lacy, suo jure (in her own right), countess of Lincoln and Salisbury, and dowager countess of Lancaster and Leicester, had a very sad life!

She was married to Thomas of Lancaster who she really disliked!

He was first cousin of King Edward II: rather violent and very averse to the King’s favourites the Despensers!

He led the discounted barons including the Welsh Marcher Barons against the King’s army and was beaten at the battle of Boroughbridge in 1322.

On his capture he was put to death and Alice’s was forced to sign away most of the de Lacy lands and almost all the Salisbury lands, which were her inheritance from her mother and rightly hers. 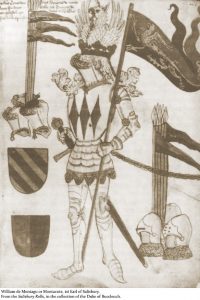 William de Montacute (Montague). The Estates of the Higher Nobility state: the rise of the Montacutes was spectacular: given the earldom of Salisbury 1337 and promised the reversion of lands held for life by Earl of Surrey. They remained Earls of Salisbury till 1428.
But we also learn that John de Warenne, the 7th Earl of Surrey and a long term enemy of Thomas of Lancaster, was given many lands in Wiltshire! He dies in 1347.

Land was given and taken away according to whoever was ‘in’ with the King at the time. 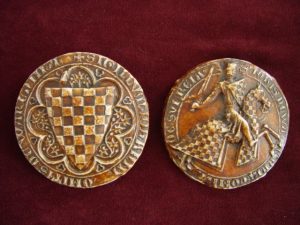 John de Warren, a long term enemy of Thomas was given many lands in Wiltshire!

York June 9.1327: …the manor of Mildenhale is held of the earl of Salisbury as proof of the manor of Aldbourne by the service of a moiety of a knight’s fee.

1347 Aug. 24 Gloucester: on the death of John de Warenne; all the land which he was given now transfers to his wife Joan, including the manor of Aldbourne. This I.P.M. is very important as it also states that the manors of Troubrigge, Amberesbury, Wynterbourne and Aldebourne …….by demise of Thomas, late Earl of Lancaster with reversion to the Earl of Lancaster and his heirs.

1349 Sept. 16 Marlborough Death of Maud de Holland held Wamberwe, of Edward Prince of Wales as of the manor of Aldbourne which is parcel of the earldom of Salisbury by the service of mowing the meadows of Stoniham and Dokham.

I.P.M. 30 November 1361 Amesbury (death of Joan)
Joan who was the wife of John de Warenne, late earl of Surrey, held for her life by the demise of the now King of the inheritance of William de Montacute. Aldeborne, Wynterborne, Trourigge the manors revert to the said William de Montacute.

In 1361 Montacute secures the Warenne lands of which the revision had been promised to his father 21 years previously: the castle and manor of Trowbridge and the manors of Aldbourne, Amesbury and Winterbourne in Wilts and land in Dorset and Somerset.

As we know these lands previously belonged to Thomas Earl of Lancaster by right of his wife Alice de Lacy and in 1365 John Duke of Lancaster sued Montague for them in King’s Bench. In July 1365 judgement was given in favour of Lancaster but an agreement had been reached by the two parties who came to a compromise, Lancaster retaining Trowbridge and Aldbourne and granting the rest to Montague.

Ref: Duchy of Lancaster papers in the Estates of the Higher Nobility in 14th Century England; and CCR and CCIR 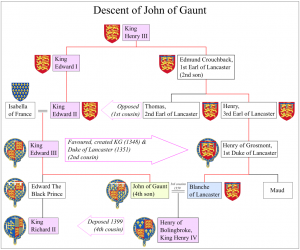 So what have we discovered?