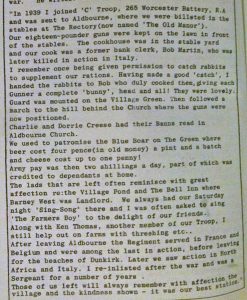 They were at the time they went to Aldbourne and Ramsbury, very much a Territorial Army unit, not really ready for battle. As time passed a lot of them were sent home to the 119th Field Regiment which was their reserve training unit.  Many of the officers including Major Wynn, as he was an older man.

Combat soldiers were generally selected from the 20-30 year old age group. Many of the younger men who came to your village, whilst very enthusiastic,were too young or inexperienced to go to war. The older men were not as fit as they needed to be. The training that they did sorted this out. The older experienced men were needed in the 119th to train the recruits.

In October/November the new replacements Arrived in Aldbourne and Ramsbury. These were battle experienced ex-Regular Army Reservists who had been in the British Colonial Armies around the world. They were put there to bolster the Territorials, who whilst well trained, had never been under fire. Several of these men went on to be awarded medals for bravery as the war progressed.

Two names who joined at this time stand out. Lt Peter Mennell and Lt  Kenneth Jupp. Both ended the War as Majors.

Peter Mennell eventually became second in Command of the Regiment. He became a Diplomat and the British High Commissioner to the Bahamas.

Ken Jupp was awarded the Military Cross at Anzio. After the war he was knighted as a High Court Judge.

The reorganisation upon joining the 1st Infantry Division in France and subsequent retraining was severe. Turning a parochial Territorial Army unit into a battle hardened fighting Regiment which went on to outperform many of their contemporaries over the next five years.

Worcester – 4.9.39 – 2150 hrs – Telegram from Divisional H.Q. requesting details of stores and personnel which cannot be moved by batteries. Details wired to Oxford 2300 hrs.

Absentees – 2 (Both accounted for)

1300 – Training proceeding in accordance with training programme. Guns packed for inspection by C.O.

1130 – 2 vehicles transferred from Malvern to Worcester, and guns with steel tyre wheels despatched

1200 – 2 further vehicles arrived at Worcester and were despatched with guns. 1200 – 6 vehicles left Malvern under command of Capt. Shrimpton.

1400 – 2 further vehicles arrived at Worcester and were despatched with remaining guns, under Lt. Styles.

1500 – 2 guns despatched from Malvern, 1 outside vehicle and 2-15 cwt’s being used. All guns now on the road to concentration area.

1700 – Lt. Styles telephoned that 1 vehicle had broken down, two replacement vehicles had been procured and the party was proceeding. Men engaged in preparation for the move, and sandbagging under Battery arrangements. Miniature range practice under

1015 – Report from Capt. Shrimpton from Ramsbury that all guns have arrived there.

Worcester – 14.9.39 – 0700 hrs – Work proceeding on damaged vehicles. One repaired and one sent to garage for further repairs.

1100 – Remainder of the batteries embussed and departed for concentration area.

1500 – Arrival at concentration area. Troops debussed and marched into billets.

1100 – Visit for Lt. Whitwell for information regarding our requirements for water supply screens etc.

266 Bty parade for instruction as under Bty Orders.

1730 – Visit from Lt. Whitwell R.E. with men and materials for constructing shelter over cooking quarters and latrines.

1400 – Instruction on deployment given by Major Howard.

1430 – Deployment and stage I & II training for officers.

1000 – Work commenced by R.E’s on baths at Ramsbury. Training as usual.

Ramsbury – 26.9.39 – 0900 hrs – Directors, Dial sights and other instruments taken to Tidworth for repair. Training as usual.

1400 – Instruction on night occupation and duties of G.P.O’s given as before by Major Howard.

1200 – Command Post training for 266 Bty Officers and specialists under the Adjutant.

Remainder training as in Bty Orders.

2130 – Dances held in Ramsbury and Aldbourne.

2000 – Practice for move by night carried out by vehicles of both Batteries. Route controlled by Military Police.

1000 – Inspection of billets by Battery Commanders.

0900 – Advance party to West Down departs under Capt. Foster.

1800 – C.O. returns from T.E.W.T. owing to uneasiness with regard to forthcoming enemy movements. Spectators return from West Down.

1800 – Lecture for all officers by Commander Royal Artillery.

(soldiers under age for posting abroad to 119 Field Regt)

Ramsbury – 3.11.39 – 0830 hrs – Batteries returned to Concentration area under their own arrangements.

3 Officers left at West Down to act as Safety Officers for the 68th Field Regiment R.A.

1100 – Court of Enquiry at R.H.Q. before 2 i/c on Gnr. Moseley for drunkenness and disorderly

1100 – Meeting in Ramsbury of 67th, 68th and 99th Fd. Regts. For sorting out and distributing equipment pooled at firing camp.

1200 – 26 Reservists posted to this Regiment. (making up numbers with experienced ex regular soldiers)

Orderly Officer takes up position in enemy territory for purpose of observation. Movements observed in O.P. areas on Three occasions.

1930 – Dances in Ramsbury and Aldbourne.

1400 – Troops engaged in preparation for move to Camp.

1400 – Arrival at Bustard Camp. Troops engaged in settling into Camp.

1700 – Battery Dances in Ramsbury and Aldbourne.

1115 – Battery and H.Q. recce groups move off to rendezvous.

Ramsbury – 8.12.39 – Training as in Battery Orders. C.O. confined to bed with temperature.

1300 – Major Asquith, I.G. arrived for purpose of inspecting the Regiment.

1900 – Dances held in Ramsbury and Aldbourne.

G.P.O’s parade at Ramsbury for instruction by I.G.

1800 – C.O’s talk to 265 Battery Officers and men at Aldbourne. Visit from Colonel Sunkey.

A.C. in gas chambers under supervision of Lt. Ward.

No casualties as yet.

1700 – Infantry Brigadier informed of the position re Very Lights.

1815 – Position with regard to Very Lights found to be deportable. Communicated to Batteries.

0915 – Position evacuated. R.H.Q. closed down and re-opened at Bell Hotel. Cleaning of guns equipment etc., after Div Exercise. Preparations before going on leave.

1200 – Capt. Kerr returns from leave to assume Command of Regiment during absence of C.O.

19 Dec. to 29 Dec. – 10% of the Regiment remain at Ramsbury and Aldbourne under the command of Capt. Kerr to continue with guard duties, general fatigues etc. Daily programme in Battery Orders as issued by Capt. Kerr.

Training as in Battery Orders.