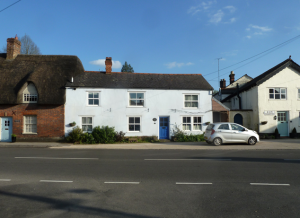 Yew Tree Cottage as it looks today does not look very distinguished by Aldbourne standards, or even very old; also, it’s not a listed building, unlike about 80 Aldbourne residences

Nevertheless, research has revealed some interesting history, including about one particular former resident, Albert Stacey

The information sources used are virtually all in the public domain, and they are available to anyone else wishing to research an Aldbourne house:

Looking behind the facade of the cottage reveals evidence of earlier occupation and construction: 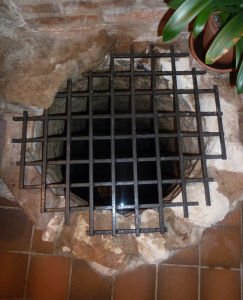 1  A well inside the cottage 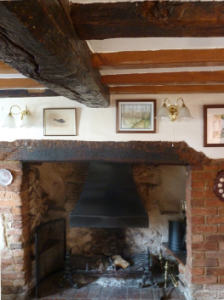 2.  An ‘inglenook’ fireplace, plus old some beams and brickwork 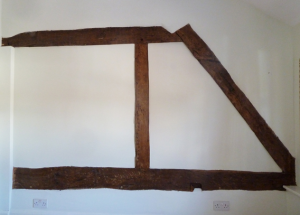 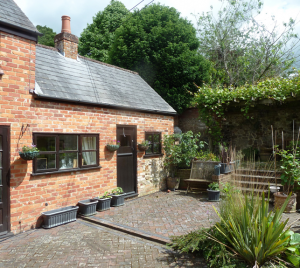 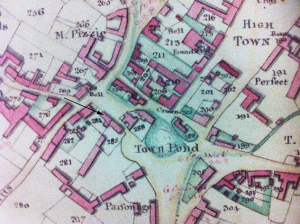 The earliest definite evidence of a property on the site is the Enclosure Map of the village, which is displayed in the Heritage Centre, and shows who owned and lived in every property in Aldbourne in 1809.  The cottage on the site is shown with a (small) side extension – it is identified as no. 284

The key to the 1809 Enclosure Map shows that the property identified as no. 284 had previously been owned by Robert Wells, but was in 1809 owned and occupied by his brother James Wells; both famous Aldbourne bellfounders 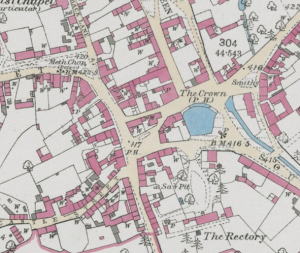 This detail from the 1886 1:2,500 OS Map shows the property (just below centre), now with a bigger side extension. Other interesting features shown on this map include the Smithy, the pub (the Bell) and the Methodist Chapel in West Street 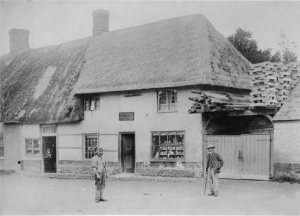 This is the earliest known photograph of the cottage, c. 1900.  It looks very different from now, with earlier roof construction and thatch

Looking more closely at the notice above the door, we see: 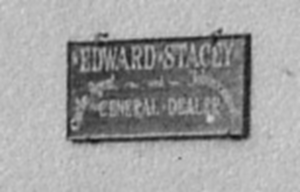 It clearly says “Edward Stacey” [Albert’s father] and “General Dealer”.  On the left is “Cycle Agent” – consistent with the bicycle in the left door in the previous slide. On the right, possibly “Tobacconist”? 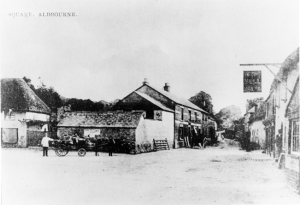 A view from West Street, early 1900s, with horse and cart. The cottage (left) is still thatched 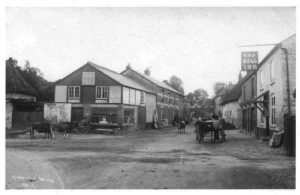 Another view from West Street, clearly later than the previous one (c. 1910?), with cattle apparently wandering freely. The cottage (left) is still thatched

An aerial photograph of Aldbourne taken in 1929 – see Britain From Above – shows that the cottage (middle right) had been converted by 1929, with the thatch gone and the roof raised.  Note also the stables at High Town (bottom left), later to be used as accommodation for US soldiers of the 2nd battalion, 506th Parachute Infantry Regiment (PIR) in WW2

A view from West Street, post-WW2, shows that the cottage is still a shop 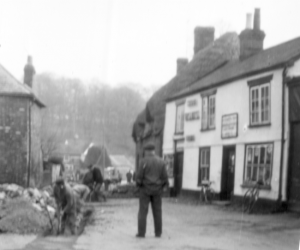 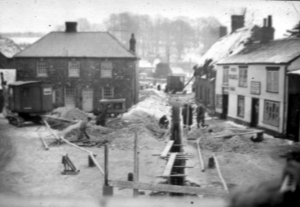 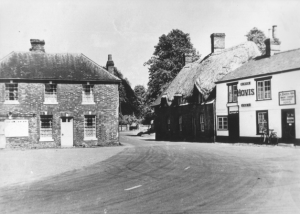 Another 1950s view, before the house on the left was demolished for road-widening

The notice above the door of the cottage says: “A. Stacey and Son Bakers Grocers Confectioners” 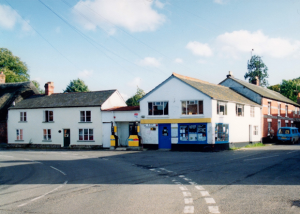 Forward to the 1980s.  The cottage is no longer a shop, and next door is a garage and hardware shop

Albert Stacey was born in 1881 and died in 1962 aged 81.  He lived in the cottage for the whole of his life, and was probably born and died there 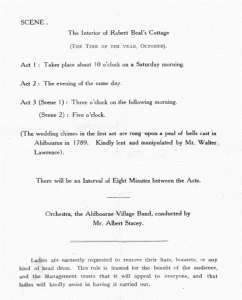 The programme for the first performance of Charles McEvoy’s “The Village Wedding” on 26th February 1910 shows that the orchestra, the Aldbourne Village Band, was conducted by Albert 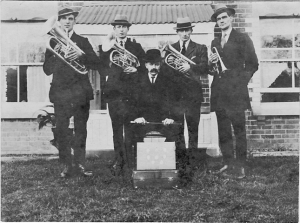 Albert Stacey with a quartet of brass players.  The back of the photograph identifies the players as (from l to r): Bill Deacon, Wilf Jerram, Fred Barnes and Jo Alder.  Both Wilf Jerram and Bill Deacon later conducted the Band 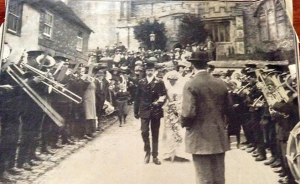 The wedding of Albert Stacey to Mabel Penny, 30th April, 1913, with the Aldbourne Band accompanying them down the Green from the Church.  On the wedding certificate, Albert is identified as a baker. 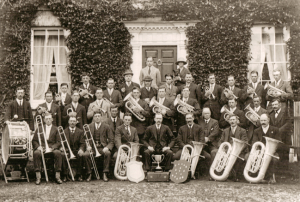 Albert and the Band outside the Old Rectory in 1922 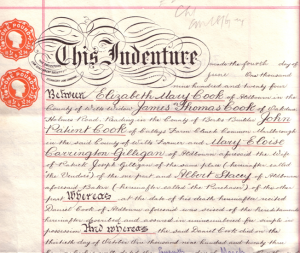 Part of the conveyance document for the sale of the cottage in 1924.  The four representatives of Daniel Cook decd., previous owner of the property, are selling it to its current tenant, Albert Stacey.  The four representatives/vendors are: Elizabeth Mary Cook (Daniel’s widow), James Thomas Cook and John Patient Cook (his sons) and Mary Eloise Carrington Gilligan (his daughter).  The sale price was £400. 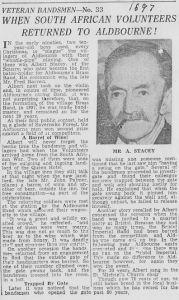 In this article from the North Wiltshire and Cotswold Herald from 1953, Albert tells some stories about life with the Band in the early days, including one when the Band accompanied the soldiers returning from the Boer War back from the station to Aldbourne, and free beer and wine was available in the village! 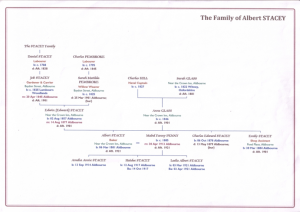 Albert and Mabel’s elder daughter Amelia married Tom Lunn.  They had a shop in West Street; one of their two daughters, Maura, married Harry Sheppard.  James Sheppard, the current chairman of the Band, is therefore Albert’s great grand-son

Albert and Mabel’s younger daughter Haidee changed her surname to Reay in 1944 and had two children with Sid Reay, Bruce and Penny.  Bruce Reay now lives near Newbury.  He visited the Heritage Centre last year, and revealed to me that he had been born in Yew Tree Cottage!

Albert and Mabel’s son, Leslie, owned the cottage/shop from 1960, but sold it on after Albert died in 1962 and the family emigrated to Australia in 1964.  Leslie’s daughter Kathleen, also born in the cottage, now lives in Perth WA, and is still in touch with Aldbourne via Jo Hutchings’ and her Aldbourne Archive facebook page